As we drove from the touristy built up beach town of Batu Ferringhi towards downtown Georgetown the scenery changed from jaded beaches, palm trees to simple local warung restaurants, high rises formed in the rich suburbs of Guerney Drive where the renown night market is held.

The taxi kept driving and spotted amongst the buildings were our first signs of life under British rule pure white colonial style buildings built centuries ago now hosting restaurants, official offices and the grand E&O hotel. The taxi then came to an abrupt stop outside a long bricked wall which would be Fort Cornwallis built by the convicts in 1808-1810.

The driver gruffly said 50 Ringett, a quick glance at the meter showed 35 before we got out.

Fort Cornwallis though isn’t at all impressive with vast green field and outer walls the appealing thing is to walk on top of the walls and look out to the open sea and imagine the sounds of the canon used to protect the island.

Georgetown, the second largest city in Malaysia is the capital of Penang and lies on the north east side of the island was inscribed into Unesco’s world heritage listings in 2008.

The town an eclectic mix of Indian, Malay and Chinese shop houses of blue and green hues blends in next to mosques, temples as well as the city street art, makes for an intriguing town to get lost while exploring the narrow lanes and when you get hungry you can stop and eat the best food in the country perhaps even the best in Asia.

When the Chinese first migrated to Penang and married local Malays their food became influenced by  using Chinese ingredients and distinct spices and cooking techniques used by Malays. The interpretation of the food can be tangy, spicy, aromatic by the use of herbs.

The most popular Nyonya dish is Asam Laksa which is considerably different to the laksa which you find in Singapore which consists of a rich or spicy coconut soup while the Penanng laksa soup is more of a sour taste of tamarind and gelugur. Laksa consists of rice vermicelli noodles and can be served with either chicken, prawns or fish

The most famous Nyonya restaurant is Kebaya which is located in the Seven Terraces Hotel . Bookings are essential if you wish to dine here, If you are unsuccessful don’t worry as there are plenty of other Nyonya restaurants in Georgetown.

Here is a link to Kebaya’s restaurant

Peranakan mansions can be seen throughout Georgetown and some of them are open to the public, giving you a chance to understand the way in which they lived. The houses were built in the 19th century and usually display antique furnitures which were used back in the day.

The Peranakan houses are easy to identify as they are colourfully painted in  shades of blue, green or purple..The most famous one and worth entering is the lime green Pinang Peranakan mansion.

If the kids are getting tired of the culture of Penang there are a few fun museums in Georgetown which are based on similar things which is photography. The 3d trick art is a fun experience where once you are inserted into the set make for  a fun photo. In a way the museum is similar to Madame Tussaud’s without the wax. 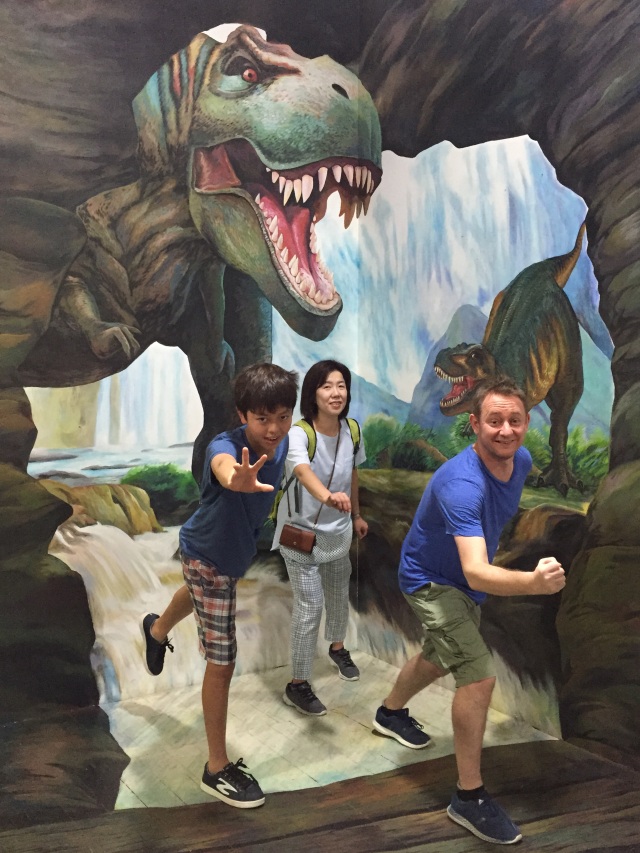 Georgetown is rich in culture and has some amazing food. It is well worth setting some time to explore the old town while you are in Penang.