Hiking has always played apart in our travels, ever since Rei was capable of walking considerable distances we started taking him out on the local trails around Osaka. Osaka being an enormous city you wouldn’t imagine there being any hiking trails nearby but these three trails are within an easy thirty minutes from Osaka.

Most travellers who come to Japan usually travel to, Tokyo, Osaka, Kyoto and Hiroshima. These being all large cities, the travellers usually don’t have enough time to get out and experience Japan’s nature which is for me one of the best secrets about the country. You can see what I mean by reading one of our previous posts Japan its wild, natural side.

These trails close to Osaka include an abandoned railway line, a trail in Minoh which leads to a forty metre waterfall and the hardest trail hiking over Mount  Rokko and over the other side to one of the oldest hotsprings in Japan we can even recommend you a place to stay in Arima in these awesome log houses.

If you’re a hiker but only going to one of the big cities then here is your chance to get out explore one of the trails when you come to Osaka. 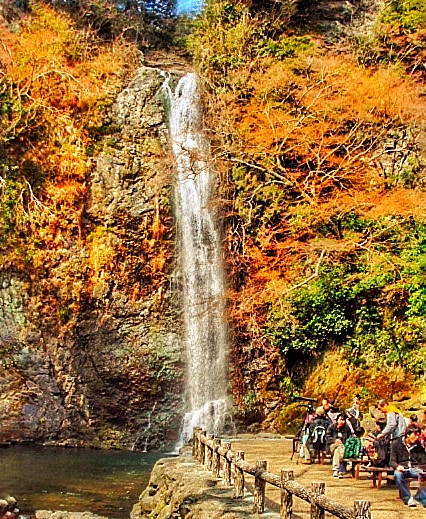 This is the easiest trail out of the three hikes actually if you had a young child you could easily push them in the stroller as the trail is completely pathed. The three kilometre trail takes approximately 45 minutes to stroll following the Minoh River to the 33 metre waterfall which is located in one of the oldest national parks in the country, north of Osaka city.

The waterfall is especially beautiful in Autumn and attracts the most people at this time. It’s best to avoid going on the weekends as people walk in droves at that time.

sometimes  at the waterfall or in the park you can be entertained  by active wild monkeys who are quite cheeky and fun to watch. Be careful of your things though if you spot them as they are known to take visitors belongings.

Along the way to the falls you will pass the insect museum which houses over three thousand insects and is worth a visit especially if you have children to see the many colourful butterflies.

Further along there is also Ryuanji temple which has an attractive red bridge which is a great opportunity for a photo stop.

Overall you have to walk six kilometres as you have to return the way you walked to falls. You might be tempted by a maple tempura. A sweet battered maple leaf that’s a popular snack amongst visitors.

How to get to Minoh waterfalls

The course is six kilometres long and cuts through the mountains following the river. The train track was abandoned to make a more direct, faster route between the stations giving way to the more scenic route

The railway tracks are still visible along the trail even though nature is starting to engulf the tracks it’s fun to see.

For this hike you will need to bring a torch as the track leads into six tunnels which  are pitch dark and you won’t be able to see anything without the torch. If you have children who are afraid of the dark then this hike would not be for you. 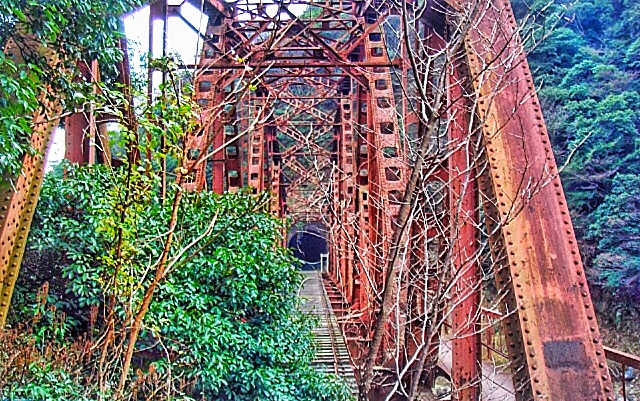 There is still one original bridge which you have to cross and it’s fun to cross this structurally sound but abandoned bridge. You can no longer walk on the tracks of the bridge but on the side of the metal passway.

The track follows the river so it may be possible to have a swim in the water as it looked shallow and clear when we did the hike.

How to get to Fukuchiyama abandoned railway tracks

JR Namaze Station is about 30 minutes by train from Osaka/Umeda going out towards Amagasaki.  You may need to change trains at Amagasaki.

Hiking Mount Rokko and going down to Arima Hotsprings

On top of Mount Rokko

This is my favourite hike in the Osaka area but it is also the longest and most strenuous track. This takes most of the day to hike but ends in Arima, one of the oldest and traditional hotspring towns in Japan.

The hike commences in Ashiya, one of the richest suburban areas in Kansai and you follow the signs that lead to Rokku garden which literally means rock garden. 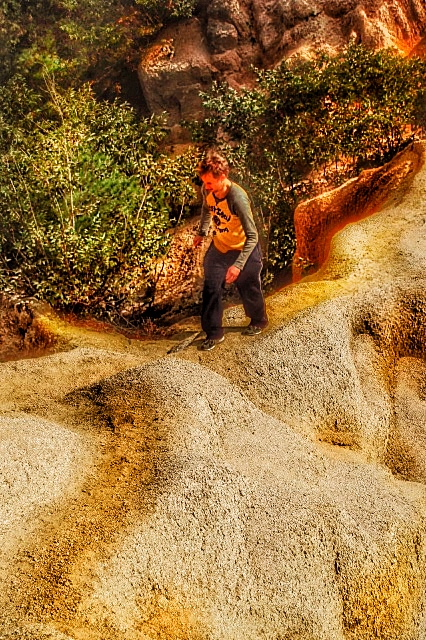 Once you are on the trail it really is an exciting time as the trail ascends quickly as you scramble up rocks, climb metal ladders, pull yourself up the steep track by rope. When you actually reach the Rock garden it is really terrain that you would find on Mars rather than somewhere near Osaka. The grainy, sandy surface is easy  to slip on so take extra caution when climbing around this area. This is definitely the highlight of the hike.

Afterwards it isn’t as steep and it plateaus out after awhile and then descends to Arima. After a long strenuous walk reward yourself with a bath in one of the many hotsprings in the town.

From Arima there are buses on a regular bases to take you back to Osaka.

How to get to the start of the trail

Take a train to Ashiyakawa station on the Osaka to Kobe Hankyu line local train then follow signs to Rokku garden.

Hope you enjoy your time on one of these hiking trails. Have you done any of these hikes? What’s your favourite hike close to a city?

3 thoughts on “Three Hiking trails in and around Osaka”