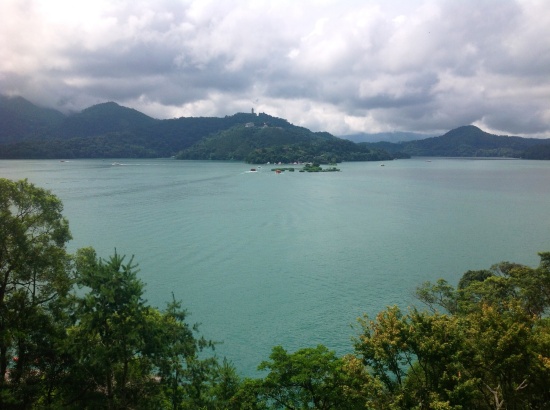 If you pointed to the middle of a map of Taiwan then your finger would point to the largest lake in Taiwan sitting 748 metres above sea level. The emerald green water is engulfed with mountains circling the east  side of the lake which resembles the sun while the west side resembles a crescent shaped moon.

The water often glistens in the light of the sun however on the first day we were there the lake and mountains were covered in a shroud of mist as the rain came down.

Fortunately for us the information center called the Lalu hotel which we were staying at and they were happy to pick us up in their car.  Sun Moon Lake even though it is an attractive natural attraction it couldn’t possibly be described as quaint as the area is quite built up with expensive hotels with views of the lake.

Lalu is one of those hotels and on arriving there was a red Ferrari parked out front. The hotel is an architectural masterpiece, set in zen like conditions with tranquil lotus ponds, to its use of bamboo, polished teak flooring and light beaming through the slatted windows. The rooms all suites with glass pained windows running the length of the room offers amazing views of the emerald water, tour boats streaming along the water, mountains rising. You could see why this hotel used to be the home of former President Kai Shek.

With Sun Moon Lake being a popular place for Taiwanese honeymooners the town is certainly set up for tourism. It is also home to the Thao’s,  native aboriginals who have lived around this area for thousands of years.

So what can one do when they visit Sun Moon Lake. Listed below we tell you five things to do when visiting the area.

There are three piers decked out along the lake. The main one is Shuishe pier which is the pier in the main town and the other two are the Syuanguang pier which  is the starting point to the Cinlong mountain hiking trail that leads to Xuanzang temple and a further 2.5 kilometres  to the leaning Cihen pagoda. The other pier is at Ita Shao which is where the aboriginal community lives. From here a cable car leads to an aboriginal amusement park and also offers stunning panoramic views of the whole lake. Without doing any sightseeing at the stops the cruise would take an hour to complete the circuit. Ferries come roughly every thirty minutes. 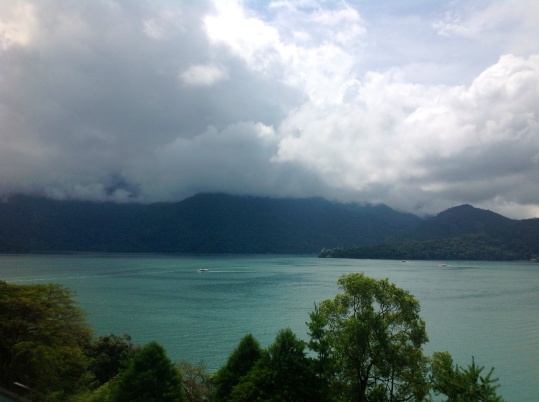 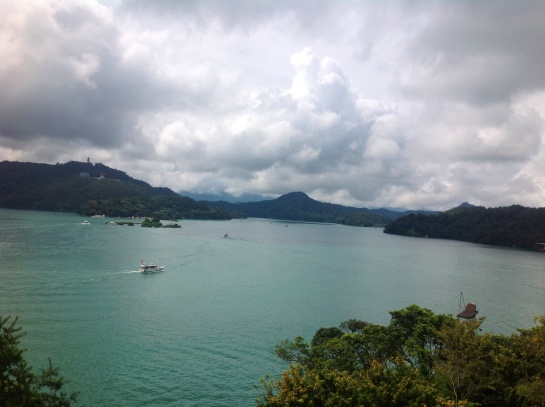 Cycle around the lake

Giant the leading mountain bike company has bikes to rent from the information centre in Shuishe for $6 an hour. The route that circles the lake covers 29 kilometres taking in the sparkling views of the water      while watching locals stroll around the lake, people fishing or selling local products. The ride was chosen by CNN as one of the most breathtaking cycling routes in 2012.

cycling route around the lake

There are fourteen hiking trails in and around Sun Moon Lake as mentioned before we hiked the Mount Cinlong trail from Syuanguang to Xuanzang temple and then up to Cihen Pagoda. The trail leads up the mountain climbing steps through betel nut plantations. It makes for a fine hike of around seven kilometres return. Other trails vary from 15o metres to 10 kilometres taking anywhere from 15 minutes to two hours to complete. 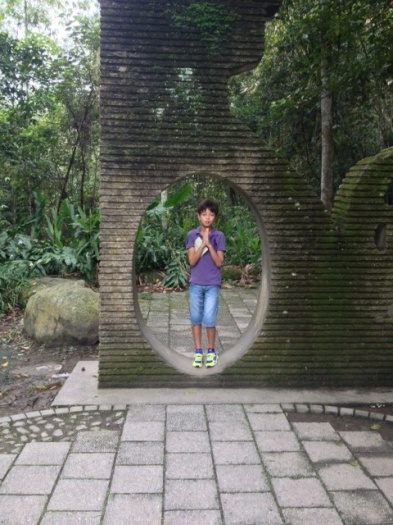 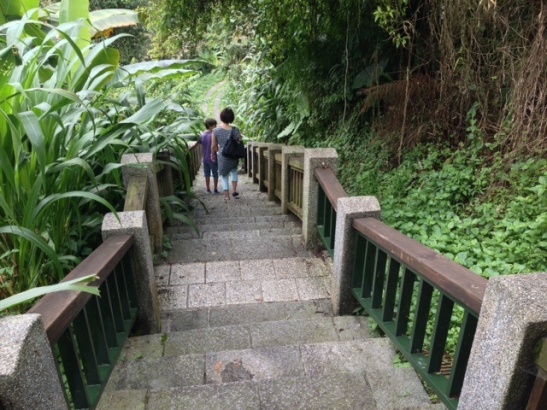 The cable car opened in 2009 and seats eight people has it climbs up the hills for nearly two kilometres. On a clear day you can see the lake in its entirety as the water gleams in the sunlight. You can also pay extra to take the cable car  further up to Formosa amusement park if you wish to have fun on some rides. We do not know what the attractions are like there as we never entered the park.

From Itashao pier walk up through the town and you will find a plethora of   small stalls and restaurants selling local aboriginal food. The best is by far the boneless chicken wings grilled stuffed with glutinous rice, a great filling snack, there is wild boar sausages and deep fried buns filled with either mushroom or cabbage. Eat till your heart is content.

You can make your trip to Sun Moon Lake as active as you want it to be or you can make it as relaxing as you want  by soaking in your views from the hotel overlooking the water.

Have you been to Sun Moon lake? Leave a comment and tell us what you thought of it.