As we walked through the cobbled stone pavement, traditional wooden buildings flanked both sides selling souvenirs to the people who wandered the street,  exhausted we slumped down on the bench and put our feet into the warm waters of the foot hot spring to help soothe our aching muscles, relieved that we had finally made it to the tranquil village of Arima one of the oldest hot spring towns in Japan. 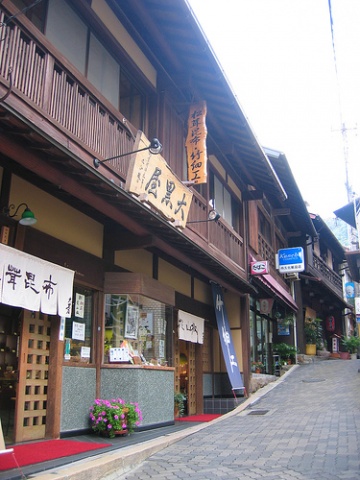 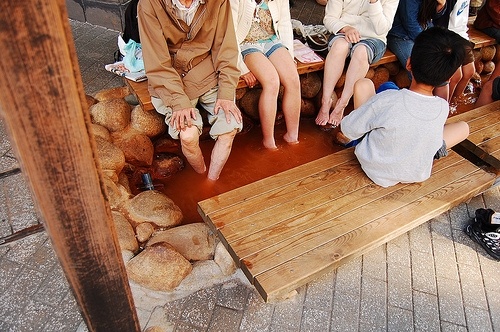 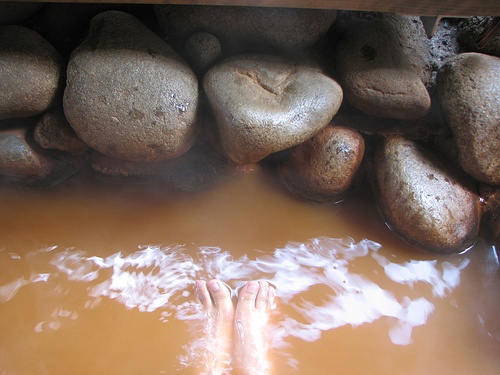 Earlier we had scrambled up rocks, pulled on chains and climbed ladders as well as explored terrain that you are more likely to see on Mars with its red grainy sand that form the rock gardens as we hiked Mount Rokko, the mountain that separates Kobe and Arima. We did all this just to reach the town that we could very easily have taken a train or bus but what would be the fun in that 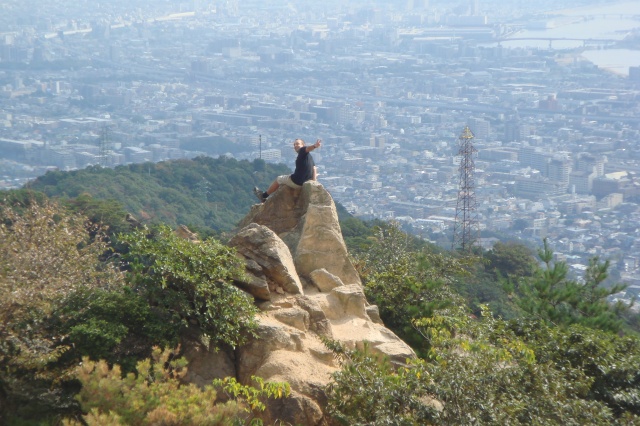 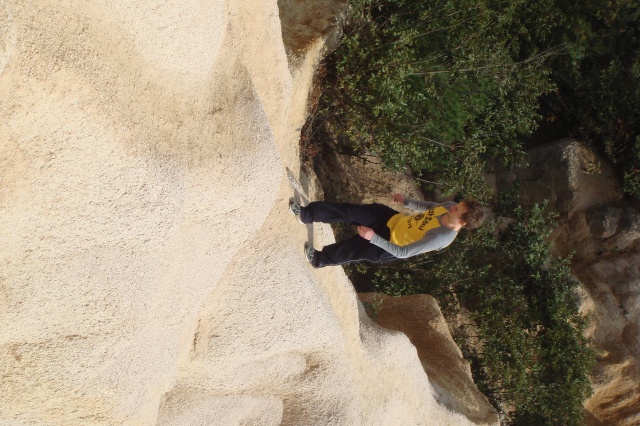 Arima came to prominence because of the myth surrounding the hot springs. Two gods descended to earth one day and saw three injured crows bathing in a puddle. Some days passed when the gods happened to come upon the three crows again. To their amazement the crows had been cured. Thinking this was remarkable they took a closer look at the puddle to discover a hot spring with a miraculous healing effect. From this day forward, the crows and two gods have been worshipped as guardian deities of Arima hot springs.

Now 1.6 million people visit annually to soak their bodies in the hot springs to help heal ailments. The water either a reddish-brown colour known in Japanese as Kinsen gets its colouring from the rich content of iron and sodium. The other is ginsen which is colourless and contains radium and carbonate.

In Arima there are a few options to take a bath either in a public hot spring or in a japanese hotel or ryokan. After a long hike we first took a bath in the public hotsprings soaking in scorching hot water of around 45 degrees. These baths are both indoors and very simple but it felt like heaven as we bathed in them. relaxing, eyes closed and the hike that we had just completed a distant memory.

Arima also has accommodation which has its own hot springs and even though very expensive we highly recommend to stay the night to not only experience the hot springs, a ryokan but also a traditional town.

We stayed at Kosenkaku, a large ryokan that also has log cabins which we stayed in. Together we relaxed played card games on the veranda, read books and soaked in the spa that was in our room.

Arima hot springs is where Toyotomi Hideyoshi, a famous samurai who unified Japan came to soak his body to heal after a long battle so if it was good enough for him, then its good enough for us and it’s definitely good enough for you.  If you get a chance when you’re in the Kansai area to try a hot spring then get yourself to Arima whether you get there by train, bus or foot.

How to get there

There are three ways to get to Arima Onsen from Kobe or Osaka the cheapest way, the practical way, or the fun but expensive way.

The practical way is to take the Hanshin, Hankyu or Sanyo Line to Shinkaichi (新開地) just west of Kobe, then transfer to the Kobe Railway Arima Line to terminus Arima Onsen. (Note that express services terminate at Arimaguchi, so you’ll need to switch to a local train.) Alternatively, if you’re coming in on JR, get off at Kobe’s Sannomiya station, take the Kobe Subway to Tanigami (谷上), and connect there to the Kobe Arima Line. In either case, make sure to transfer at the Arimaguchi station onto the (one stop only) Arima Onsen line. The whole trip will cost around ¥900-1000 and take about half an hour.

The fun way is to take the Hankyu line to Rokko station and continue up Mt. Rokko on the cablecar (10 min, ¥570/1000 one-way/return). Connect with the bus loop line (10 min, ¥250) to the Rokko Arima Ropeway, then take the ropeway down to Arima Onsen (12 min, ¥980/1770 one-way/return). The Rokko Arima Katamichi Jōshaken (六甲有馬片道乗車券) combination ticket (¥1700 one way) works out marginally cheaper, and also lets you ride around the top of Mt. Rokko. This route is more scenic, but best avoided with heavy luggage.

The cheapest way is to take a bus from Sannomiya bus terminal that leaves several times a day (50 min, ¥720). The final destination of the bus is Arima Onsen, so it’s easy to find the bus in the timetable and no chance to skip the stop accidentally. You should pay the driver upon exiting, no need to get the ticket at the booth. The bus is rather small with no place for heavy luggage.