Hong Kong’s skyline looks different at night, the light illuminates the city adding a more vibrant feel to it, the water of the natural harbour is full of darkness except for the lights of the odd Star ferry crosses the waterways. The city is abuzz with people dining or having a drink. Hong Kong really does feel like a city that never sleeps.

To observe the best night views of Hong Kong or even possibly the world is to go to what is known simply as The Peak. You can reach The Peak by bus, taxi or The Peak Tram, which is an attraction in itself, but be prepared to wait if you chose the tram as The Peak as over 7 million visitors a year with most of the people chosing to take the tram up the 552 metre mountain that hauls people every 10 to 15 minutes.

Even though the queue was long, no one moved when a taxi driver, while waiting for the lights to change shouted from his car “line too long, 2-3 hour wait, I’ll take you”.People didn’t believe him, thinking he only wanted money or people wanted to ride the traditional way, but had we known that the driver was telling the truth, we wouldn’t have hesitated to take the taxi. Two and a half hours we waited, our patience, wearing thin the words “come on, come on” being muttered not once but at least a half-dozen times. The tram finally trudged our way up the peak. 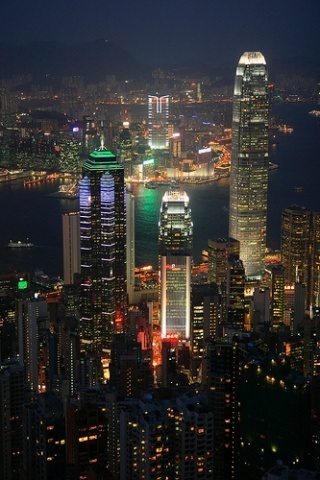 The Peak first came to relevance when the wealthy were looking for the perfect retreat from Hong Kong’s scorching Summer heat. Houses and residents moved in but at the time there was no tram and the original residents reached their homes by sedan chairs, which were carried up and down the slope by about six people who were employed by the residents . Can you imagine being pulled down a mountain by six people on their shoulders. The Peak Tram came to life in 1888 and the rest is Hong Kong history.

Once on top, you guessed it the trams station is on the basement of The Peak Tower which is basically a shopping mall. It’s Hong Kong it has to be located in a mall, doesn’t it?  The Peak Tower has the Madamme Tussards wax museum, for restaurants, which were all full to capacity when we were there and of course the view. 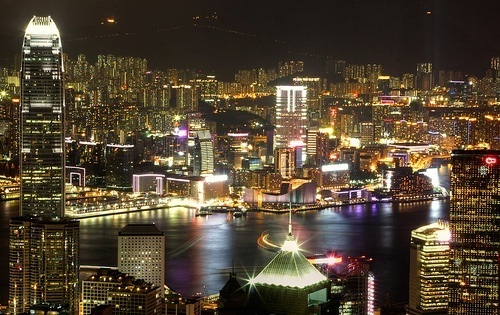 The view, how shall I describe this, is like a sky full of stars at night, twinkling, brightly in the sky, with sparkles of blues, green red and white lights illuminating the night skyline, the shadowy, silhouette water of the harbour. The views overlook Central Hong Kong,Victoria harbour and the surrounding islands.

This is Hong Kong’s number one attraction and people often rave about The Peak, and often come here twice on their trip, once at night, once during the day. I’m not going to lie it is beautiful, maybe I would even say stunning but I wouldn’t use the word breathtaking that many people use. Maybe it was the crowds or the long wait but I wouldn’t go again if I were to go to Hong Kong.I might if my arm was twisted and my Travbuddy really wanted to go and check the view during the day, which I believe there wouldn’t be as many people.

enables you to go to the very top of the tower

Take the peak tram from Central, around a 10 minute walk from Central station. There are plenty of signs to follow.