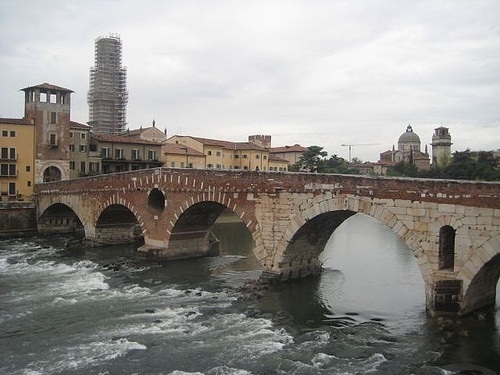 Walking along the stone arched Ponte Pietra with rain streaming down, I paused to take in the surrounding scene, the shallow teal green water of the Adige river swirled over the protruding rocks forming white rapids, to my left at the foot of the hill were the ruins of the roman theatre built in the first century BC. Adjacent to the bridge, stairs wound up, climbing above the theatre , towards the run down San Pietro Castle which is not open to the public.

Ponte Pietra bridge with the Adige river flowing below

This is not the attraction though. It’s the view of the rolling hills, the flowing river under the Ponte Pietra bridge completed in 100 BC before the arches were blown up by the retreating Germans.The red terracotta roofs, the towering spires of churches and the roman theatre below.

On the same grounds as the Roman Theatre inside the convent of St Jerome is the archeological museum, a collection of statues, bronzes, inscriptions , mosaics and ceramics collected from all over Verona.

The doors opened up to one of the best preserved Roman theatres in Northern Italy rising nearly sixty metres up the hill  on terraced levels. It’s hard to believe that until the late 19th century the ruins had completely been built upon. It wasn’t until a rich merchant bought the entire complex and conducted demolition and excavation projects that they were discovered. Still now the theatre is used for performances.

The Arena still being used for concerts

Earlier we had been to Verona’s main attraction, The Arena. The unbelievable thing is the pink marble amphitheatre is still being used to host opera in the Summer with seating capacity for 30,000 people.It was built in the 1st century AD and survived a 12th century earthquake. We slowly walked around the circumference of the theatre from the top row of sets, peering down at the ground where my imagination went wild as visions of gladiators fighting for survival swept through my mind.

People come to Verona for the Shakespeare experience to see where the fictional characters of Romeo and Juliet lived . To see a balcony that two people could barely fit, let alone scamper the wall or climb a tree to reach, while there they’ll rub the breast of Juliet’s statue and scribble down some message on the wall. Verona to me though is about what the romans did, they came , they built and after all these centuries they still remain.

5 thoughts on “Verona, it’s all about the Roman ruins not Shakespeare”