It wasn’t the most beautiful painting I had ever seen and it definitely wasn’t the biggest I had seen but Da Vinci had me so intrigued  as who the Mona Lisa was. Her flowing jet black hair swept away from her face, her bulging puffy cheeks and those lips, half curled up smile. Who was she? What relations did she have? Was it even Da Vinci dressed in drag?  I left the Louvre that day wanting to see more of his art,know more of his scientific accomplishments, after all  Da Vinci was a genius.

Over the years I kind of forgot what I felt that day until Dan Brown brought out the brilliant novel The DaVinci Code. Even though the book was purely pulp fiction. My memories came racing back just like I had found the Mona Lisa so intriguing, Dan Brown had captured me with the way he had woven his story together.

Milan doesn’t have the best of reputations in terms of keeping the attention of its visitors for long, strewn in graffiti, a city made up of dark  limestones giving it a grey dull appearance. A city that had been severely damaged in the war and had been rebuilt to become a thriving cosmopolitan, the business centre of Italy, rich in fashion and opera culture. Luckily though the old historical centre area is well kept with the magnificent Doumo as its centrepiece.

DaVinci though was also a big part of Milan, seeking his treasure, following in his footsteps brought the city alive transporting me back to the 15th century like I was some kind of time traveller. While walking up one of the few cobblestone paths that led to Santa Maria Delle Grazie  Church, I felt like I was Robert Langdon as he was about to enter a church not knowing what to expect in his pursuit of the murderer. The church was a  red and white brick building, simple in design not elaborate like many of the churches in Italy. On the right a busy road with cars streaming by, tram rails lined the middle of the street. One could have thought that such a place would never hold such important work.

A thick glass door preventing the 25 people who anxiously waited for the sliding door to open, people chattering amongst themselves, some tapping their foot “excussi, excussi” a woman politely said as she moved through the crowd. She stopped in front of the crowd and introduced herself, first in Italian then in English. She made her point perfectly clear that there would be no photography before pushing the button, the doors slid open. The guide led us to the room to reveal the mural of the Last Supper.

Jesus sat in the middle of the table dressed in an orange robe draping over his right shoulder. Jesus had just announced that one of his Disciples  at the table would betray him. Some looked on in astonishment, some were angered, some wanted to know the answer and then there was Judas wearing green and blue slouched on the table who is taken back by the sudden revelation of his plan, Jesus hand rests close by.

The painting had been through alot over the years. It survived the war when in August of 1943, the ally forces bombed the church and the convent. The wall stayed intact after being sandbagged to protect the painting, the side walls were destroyed now these two walls are left painted in white. the painting had also been painted on a dry wall rather than on a wet plaster with tempera because of the method used the painting had severely deteriorated and has been restored numerous times. People whispered amongst themselves no one dared to speak in their natural tone so they would not disturb others, 15 minutes went by and my eyes  never left the painting, soaking in the importance of this work before we were led out of the room. 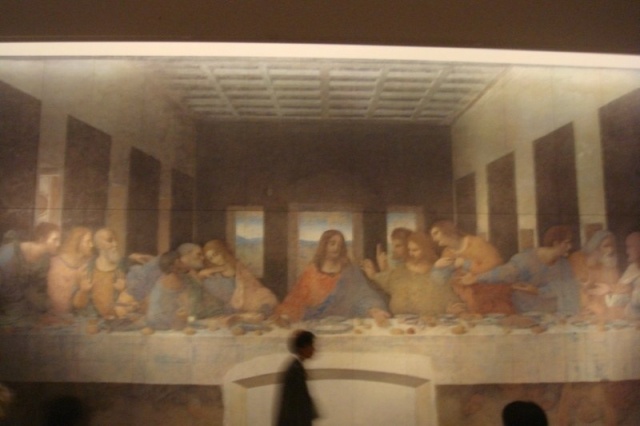 In the dimly lit sacristy of the same church where DaVinci and Bramante often hang out together I was fortunate enough to view 50 pages of the 12 set volume of DaVinci’s Codex Atlanticus. A collection of 1119 pages of everything from studies of bird flight, sketches of complex machinery to writings about water.This was DaVinci’s notebook like a diary would be to us but this was his studies everything he ever thought about had been jotted down. Looking at his work was hard to define though the audio headset wasn’t worth a grain of salt. It gave a brief history of the book I learned that DaVinci had his own shorthand that he would write from right to left instead of left to right. Some scholars believed that he suffered from some kind of autism while most believe he was left-handed and was forced to write that way so his work would not smudge. Each piece had information about it in Italian that would rotate followed by an English translation however it would stay on Italian for like 10 minutes while staying on the English side for about a minute as much as I wanted to appreciate DaVinci’s work I found it increasingly frustrated so we left dispirited.

My spirits were lifted though at Sforzesco’s castle a rich red brick building,  steep  in history, originally a Visconti fortress, later the home to the mighty Sforza family. It was nice to wander around its green manicured grounds.The castle now houses numerous museums but the reason we were here was to get a closer look at the castle and this time to look at the defense system that DaVinci had designed. 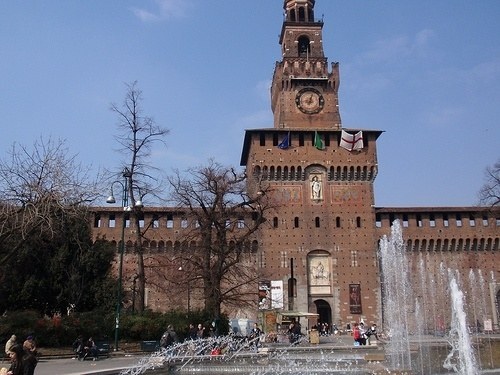 DaVinci had left his mark on this city through art, design and science and by the end of the two days Milan had left its mark on me. It may not be everyone’s favourite city but if given a chance Milan is a pleasant suprise.

6 thoughts on “Milan, it’s all about DaVinci’s city”