Aquaria KLCC is located on the concourse level of the Kuala Lumpur convention center, a short walk through the Suria KLCC shopping mall, following the signs will lead you there.

We had a two hour waiting time to climb the Petronas Towers so we decided to fill in our time by visiting this colourful Aquarium.

The Aquarium had over 5000 different exhibits of aquatic and land loved creatures. Once you’ve entered the aquarium you are first met by the school of hungry piranhas with bulging eyes and sharp razor like teeth. I have always wondered if it was truth or myth about their desire for human flesh so I was tempted to put my sons hand in the tank to observe the scientific experiment but my son wanted to have nothing to do with this, screaming and running over to the hand on exhibits of the touch and feel area where people are given the opportunity to feel crabs, starfish, turtles and even a small shark, why is my son willing to touch a shark but not a piranha, I know which one I would rather touch.

After the enjoyable hands on experience we were treated to discover the animals of the rain forested jungles, otters swam around chasing fish that the keeper was throwing to them scoffing the fish down before moving in on the keeper, wanting more. The slimy, scaly snakes and the gruesome hairy looking tarantulas made us hurry off towards the main event, the 90 metre, transparent tunnel home to marine turtles, giant stingrays and the impressive sand tiger sharks.

First we walked through the tunnel, stopping watching the fish swim by, the large Napoleon fish with its think lips, purple body held his own territory in the corner daring any fish to enter his lair before chasing the darting fish away it would swim back to the same corner and do it all over again to the next unsuspecting fish. 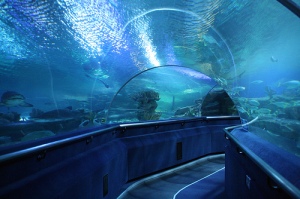 Stingrays floated overhead with their white under body on full display, big gaping holes for its eyes and its gaping mouth curled up like a smiling ghost. We saw the moray eels have the courage to swim out from its hole in the rocks, its body squiggled and squirmed through the water before circling around and entering its home. It was only for a brief time, but it was memorable experience having never seen them leave their sacred house.

Then their prized attraction swam by, the sand tiger shark with its bulging belly, protruding teeth, shiny glassed eyed ,controlling the waters, I followed it, watching it carefully to see how it swam, reacted to other fish, it swam slowly but passively, no aggression was shown, no attack on the other fish that swam close by. Then the tunnel exited and we took a few steps back, to see a large group of people watching waiting for feeding time.

The diver with his one bag of food was at the mercy of whatever came his way, it was a feeding frenzy, the fish, the stingrays, the turtle all seethed on him at once,he tried valiantly to share the food around, pushing probing the hungry, greedy stingrays and turtles enabling him with the other hand to give food to the other fish.

The aquarium may not be the largest that I have been to but is definitely a satisfying way to use a couple of hours while waiting to reach the top of the Petronas towers.

Have you ever been to Aquaria KLCC? We would lover to hear what you thought of the aquarium.